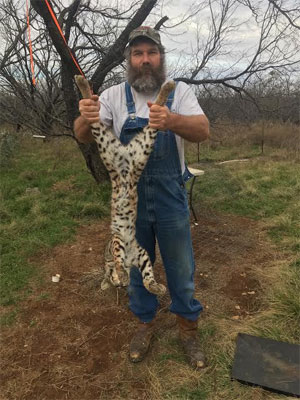 We will have a lunch, I will provide the meat and will do a pot luck for the sides and dessert.
A short membership meeting will be held, there are many changes going on in the TTFHA so we will discuss them. We will also hold a raffle. Anyone wanting to donate an item for the raffle please contact: Earle Blakney. If you have trapping related items to sell or trade feel free to bring them. I will be happy for any trapper in any District to attend this event. Please RSVP with Earle at 817-559-3281 or earle.blakney@yahoo.com so I can get a head count. Look forward to seeing everyone here, Earle.

We had an awesome time with a turn out of 19 people. Personally I think having a group this size worked very well as during the demos every question could be asked and information swapped. Our district raffle was successful and our meal was a great success with Troy Warren and Shawn Stokes cooking. Gloria Applegate handled the sign in, raffle sales, and child care. We had a meeting during the lunch in which I thanked everyone, informed them about the spring convention to be held in Jacksonville in April. I told those in attendence to be on the lookout for the new bylaws. I also read the email Mark June forwarded to board members from Frank Barton, NM trapping association president about how New Mexico trapping is under attack and I encouraged them to reach out to our trapping brothers to the west and see how we might help.

Every donation received a certificate of appreciation as did all of our gentlemen that did demos. Thank you to all who helped and especially to all who attended! - Hollee Applegate-Warren District 6 Director 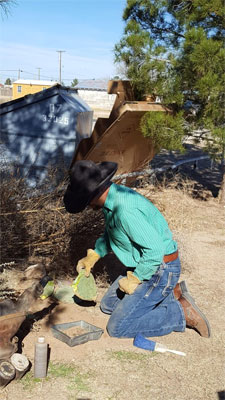 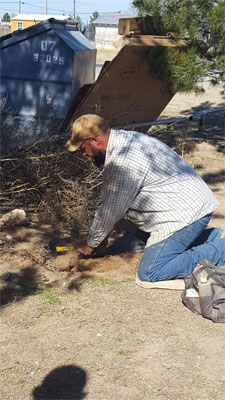 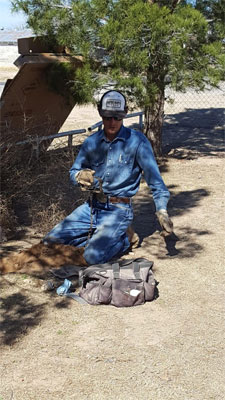 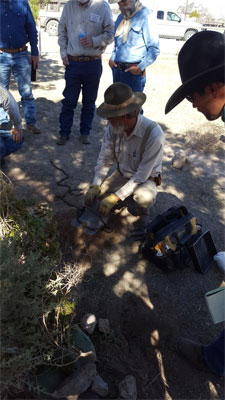 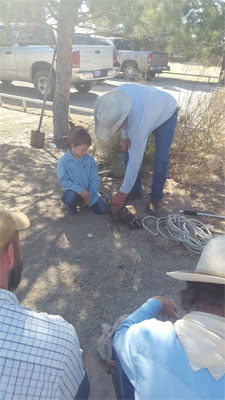 The first ever District 1 meeting was a big success. The weather was a little cool and breezy but everyone was able to get down in the breaks to do all of the trapping demos. We started off with a meet a greet where John Dea handed out name tags. The sign in area had membership applications and the new association brochures available.

Followed the meet and greet there was a great coyote skinning demo by Roy Finley who shared a very interesting and beneficial approach to skin coyotes. 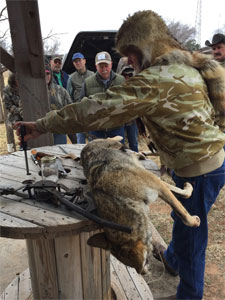 We then had a demonstration by Jeff Jones who showed everyone how he makes a flat set for coyotes. 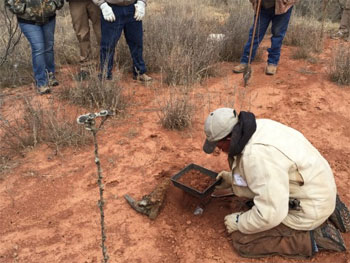 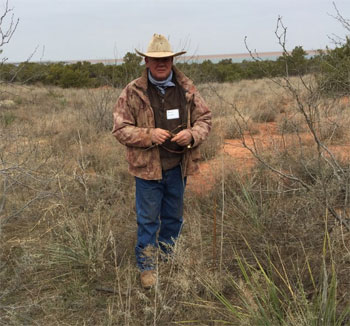 Lunch was provided for attendees and after lunch Jim Vaught gave an outstanding and very informative presentation on the dispersal, location, habitat and trapping of Mountain lions. 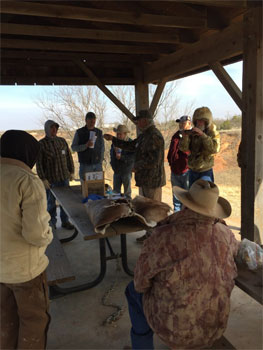 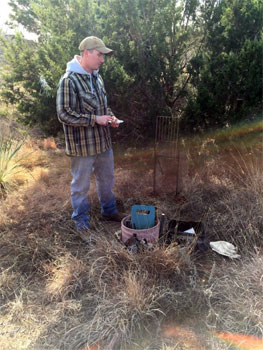 Wayne Reed showed how he makes a Rub set. 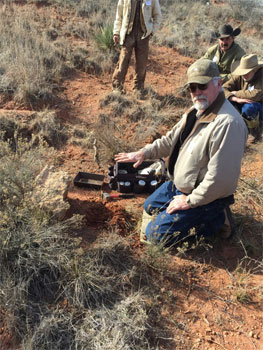 After the demonstrations, District Director Jay Krottinger led a TTFHA business discussion. Twenty attended the gathering, a significant number in a district of twenty-four members! Overall, there was a sharing of trapping knowledge by some very skilled trappers and we'd like to thank those who gave demonstrations. The trappers who attended the first ever District #1 wholeheartedly agreed that they'd like to see the district have another meeting in the future!

District gathers to watch a demonstration 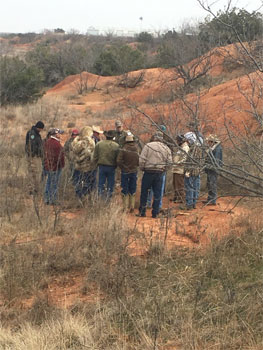 Jay Krottinger showing how he makes his predator set 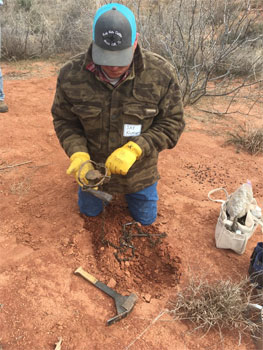 District 3 Director Don Hightower wondered if a district meeting the first part of December would be of interest to members in his district, but as it turned out, he had nothing to worry about as 42 people attended a very successful gathering of trappers!

During the meeting, TTFHA business was overviewed and discussed and input was sought from all those attending. In addition, James Gallaspy from R&P Outdoors summarized the current fur market and what trappers should expect to receive for pelts this year. All in all, trappers who attended saw that meetings at a local level are an excellent way to meet fellow trappers, discuss relevant trapping issues, and enjoy the afternoon with like minded sportsmen. Here are several photos from the event. 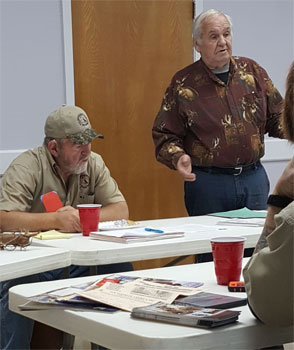 Brown County Sheriff Tom Castloo stopped by to check on the action as he heard a bunch of good trapper types were having a meeting to discuss business! 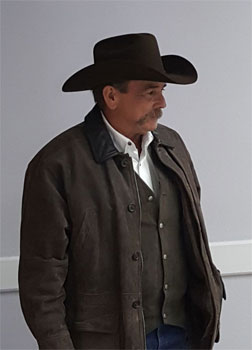 Chris Guthrie donated bottles of his Muddy River Predator Baits at the meeting. Thank you Chris! 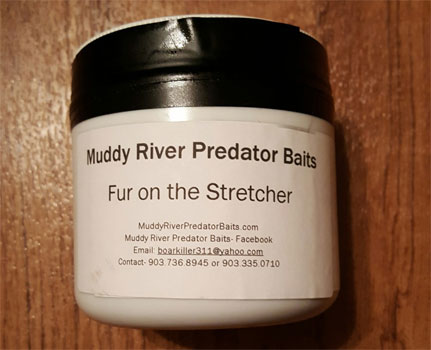 Pastor John Micheal Mars joined as a new member plus he took care of keeping the coffee brewing!

DISTRICT 5 MEETING ATTENDED BY A WIDE ARRAY OF TALENT! 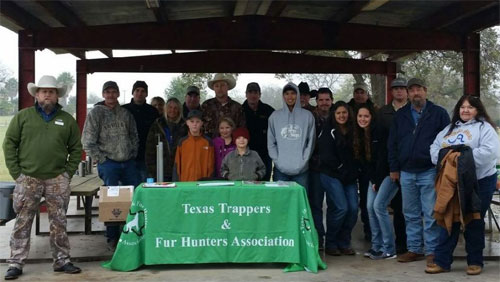 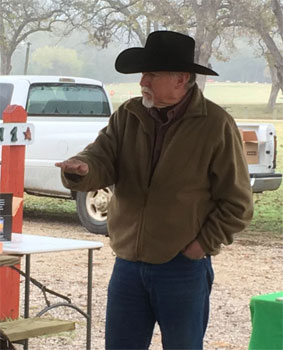 Matt Carter of Pearsall,TX gave an excellent demo on successful coyote sets. He also discussed the importance of passing on those basic, successful techniques to our youth. 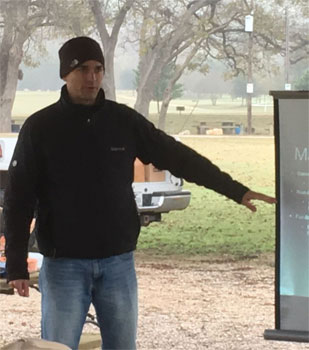 Jonah Evans continued with a very interesting presentation on tracking of various wildlife specie. Mr Evans also discussed his experiences tracking in other countries. Harvey Dickens of San Antonio,TX concluded the day by giving a very unique demo on DP's and their place in Furbearer trapping. Mr. Dickens incorporated his vast experiences of being an active trapper in New York. 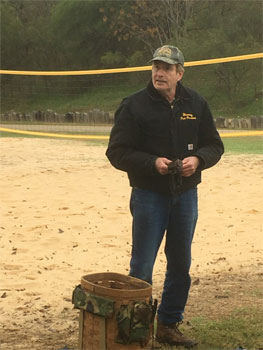 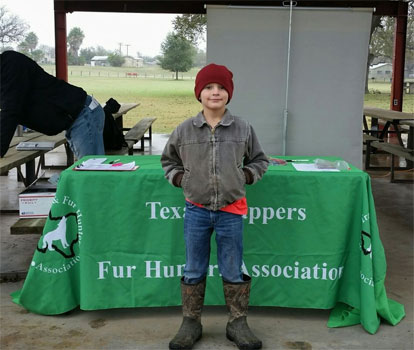 Back to Past Events Page